The Most Powerful Bank: Inside Germany's Bundesbank 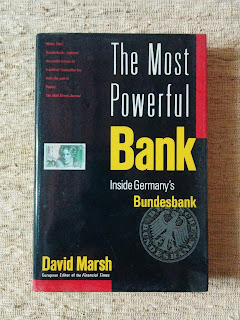 The Most Powerful Bank is the first-ever book-length examination of the powerful, highly secretive Bundesbank. The might of the Deutsche mark gives the Bundesbank greater influence over European monetary policies than most elected governments. With the ascendance of Germany as Europe's premier financial power, the actions of the German central bank affect national economies and corporations around the world. No economy is exempt. As The Wall Street Journal has observed: "When Bundesbank President Helmut Schlesinger tightens the credit screws in Frankfurt, Caterpillar Inc. feels the pain in Peoria." In this compelling and informative book, David Marsh, a veteran correspondent for the Financial Times, goes inside the Bundesbank and the inner workings of the churning German economy to provide a revealing portrait of what has often been called "the bank that rules Europe." In bringing to life the Bundesbank and the people who run it, Marsh leaves no stone unturned. He draws on extensive research in previously secret Bundesbank and government archives, and more than a hundred interviews with senior officials, past and present, from all parts of the German economic establishment. His is the first detailed account of the nature and role of an organization that is little understood as it is extraordinary. Among a series of astonishing findings, Marsh reveals the continuity between the Bundesbank and the Reichsbank, the pre-1945 central bank which was at the heart of the Nazi state. Above all, Marsh offers a fresh vantage-point from which to examine the deep-seated political and economic changes underway at the heart of Europe. German unification, while adding considerably to Germany's long-term potential, confronts the country with its gravest challenge since the aftermath of the Second World War. With Germany struggling to master an unaccustomed surge in inflation, the Bundesbank is in the forefront of efforts to control post-unity economic turbulence. This has begun.
Lihat Juga
Buku Unggulan
Labels: Buku Import, David Marsh, Manajemen dan Bisnis, Times Books, uku Berbahasa Inggris