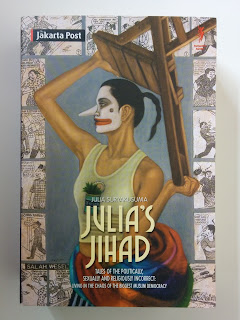 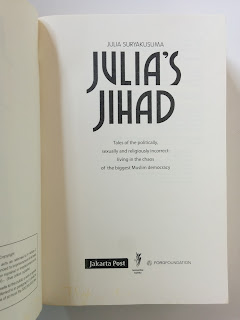 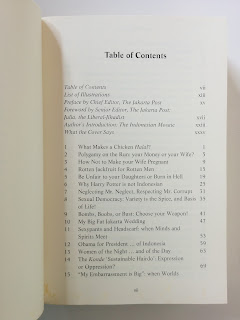 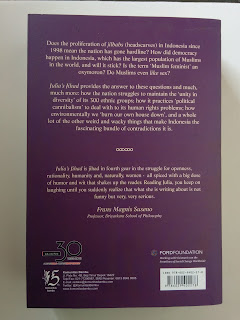 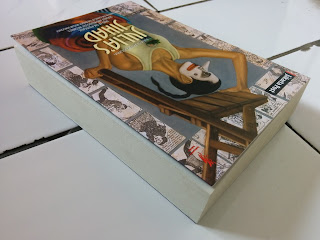 Does the proliferation of jilbabs (headscarves) in Indonesia since 1998 mean the nation has gone hardline? How did democracy happen in Indonesia, which has the largest population of Muslims in the world, and will it stick? Is the term 'Muslim feminist' an oxymoron? Do Muslims even like sex?

Julia's Jihad provides the answer to these questions and much, much more: how the nation struggles to maintain the 'unity in diversity' of its 300 ethnic groups; how it practices 'political cannibalism' to deal with to its human rights problems; how environmentally we 'burn our own house down', and a whole lot of the other weird and wacky things that make Indonesia the fascinating bundle of contradictions it is.

"Julia's Jihad is jihad in fourth gear in the struggle for openness, rationality, humanity and, naturally, women -  all spiced with a big dose of humor and wit that shakes up the reader. Reading Julia, you keep on laughing until you suddenly realize that what she is writing about is not funny but very, very serious."
Frans Magnis Suseno, Professor, Driyarkara School of Philosophy

"The remarkable feature of Julia's style is the way she approaches the most challenging and unconventional questions, which even in the liberal society of Indonesia remain unspeakable. In the process, she uses critical thinking to attack the comfortable picture Indonesians carry in their minds regarding gender equality, sex, religion and the interplay of informal and formal leadership. Her pen is bold and her spirit indomitable!"
Sanaullah, Pakistan Ambassador to Indonesia

"Julia is not just a critical feminist, but also a true humanist. She moves us to sincerely respect our fellow human beings and the plurality of culture and religion as certainties, and even sources of peace."
Musdah Mulia, Professor, postgraduate studies at UIN (State Islamic University), Jakarta

"The Jakarta Post is fortunate indeed when Julia Suryakusuma decided to grace its editorial pages. Her regular weekly columns - incisive, witty, sardonic capped with a touch of wisdom - are a constant delight to the majority of readers. In her many years as the Post's loyal contributor Julia has created a vast audience of admirers."

"Julia Suryakusuma is provocative and she is courageous. She has a sharp eye for stupidity, hypocrisy and discrimination, wherever she finds it. And she finds a lot of it - the range of her topics is wide. Sometimes she is quirky and irreverent and sometimes her wit is driven by rage."
David Reeve, Conjoint Associate Professor UNSW, ILTI Academic Coordinator ACICIS.

"Witty and intelligent, articulate and fun, Julia makes you laugh or cry  - but always think.  Very unconventional, but truly analytical and critical, she describes the things we often choose not to see."
Melba Pria, Mexican Ambassador to Indonesia

"For me, Julia is a Muslim at the edge. While her formal educational background has no connection to the study of fiqh (Islamic jurisprudence), this book engages anyone in dialogue and discussion who has a conscience and who cares about raising the dignity of this nation and its people."
Komaruddin Hidayat, Rector, UIN (State Islamic University), Jakarta

"Indonesians often sweep awkward or embarrassing matters under the carpet. Julia Suryakusuma has a penchant for pulling back carpets and laying bare what lies beneath. Never, it seems, is she afraid to examine an issue that others would prefer to avoid."
David Jenkins, former Foreign Editor of The Sydney Morning Herald, is the author of Suharto and His Generals: Indonesian Military Politics 1975-1983.

"Sentence after sentence of Julia's writings is full of strength! With the power of words, she projects herself in four manifestations: as a woman, an Indonesian, a citizen of the world, and as a Muslim."
Neng Dara Affiah, Head, Fatayat NU and Commissioner, National Commission on Violence Against Women (KomnasPerempuan)
Lihat Juga
Buku Unggulan
Labels: 60.000, Buku Bekas, Buku Berbahasa Inggris, BUKU TERJUAL, Julia Suryakusuma, Komunitas Bambu, Non Fiksi, Sosial & Politik