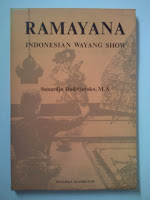 Sinopsis Buku
It Should be pointed out here that the story is actually the Indonesian version of the famed Indian classic "Ramayana". Coming centuries ago from the snow-capped Himalayas to the warm plains and snowfree mountains of Indonesia, the original epic has of necessity undergone many drastic changes, affecting not only geographical and personal names, but also the story itself. This of course is readily understandable when we realize that on its arrival on Indonesian soil, the Indian "Ramayana" encountered a vigorous, already booming indigenous culture which in the course of time reshaped and remoulded it into its present form. In point of fact, the epic is now deeply rooted in our national heritage and forms part and parcel of our national life. This is proved by the existence of the three characteristically Indonesian forms in which the epic manafests itself, namely: the "Wayang kulit" which is a shadow-play ("wayang" and "kulit" mean respectively "shadow" and "leather"), the "wayang orang" which is a type of opera ("orang" means "men"), and the "sendratari Ramayana" which is a type of ballet, all of which enjoy great popularity.