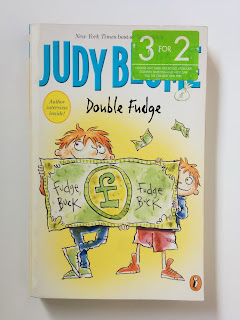 Fudge is obessed with money. He's going to be a miser for Halloween and has made plans to buy the entire world (or at least Toys"R"Us). But life really gets crazy when Fudge and his older brother, Peter, run into their long-lost relative, the Howie Hatchers. Now they have to deal with annoying twin cousins and a weird younger cousin, concidentally named Farley Drexel Hatcher--just like Fudge! Their name aren't the only similarity, and before long, mini-Fudge is causing just as much trouble as Fudge alwasy has!
Lihat Juga
Buku Unggulan
Labels: Buku Bekas, Buku Berbahasa Inggris, Buku Import, BUKU TERJUAL, Judy Blume, Novel, Puffin Books