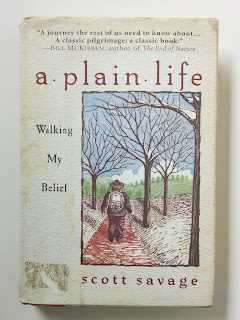 In today's fast-paced, high-tech world, the most radical act of all might be this: to slow down . . . to try, in each moment, to be fully, truly present. Scott Savage, editor of the hand-produced Plain magazine, spent ten years trying to do just that--by embracing his Quaker faith and, with his family, rejecting the trappings of modern life, technology, and media. Then Scott decided to seal his commitment to the plain life by terminating his driver's license.

In this account of his week long walk across the state of Ohio to officially hand in his license at the state capitol, each moment of the road leads to contemplations of what the transition to the plain life has meant for Scott, his wife Mary Ann, and their children. We come to understand that the Savage family's chosen life is not easy by any means, but the rewards of place, presence, authenticity, and community which have accompanied their rejection of what most of us take for granted are immense: the arbor of shade trees surrounding their house, the laughter of the children who without TV learn to create their own games and stories, the family activities of preparing food and tending the garden.

As Scott walks along in meditation, with trucks rumbling by on the nearby highway, he cannot help but think of Ned, the buggyhorse who, at the end of Scott's pilgrimage, will be the family's only engine.

There are vital, life-affirming lessons for all of us here--who might have only imagined taking some of the steps that the Savage family have put into practice. In A Plain Life, we walk into a smaller, revolutionary world, where the journey is sacred, and each step . . . a destination.
Lihat Juga
Buku Unggulan
Labels: Ballantine Books, Buku Berbahasa Inggris, Buku Import, Inspirasi & Spiritual, Scott Savage